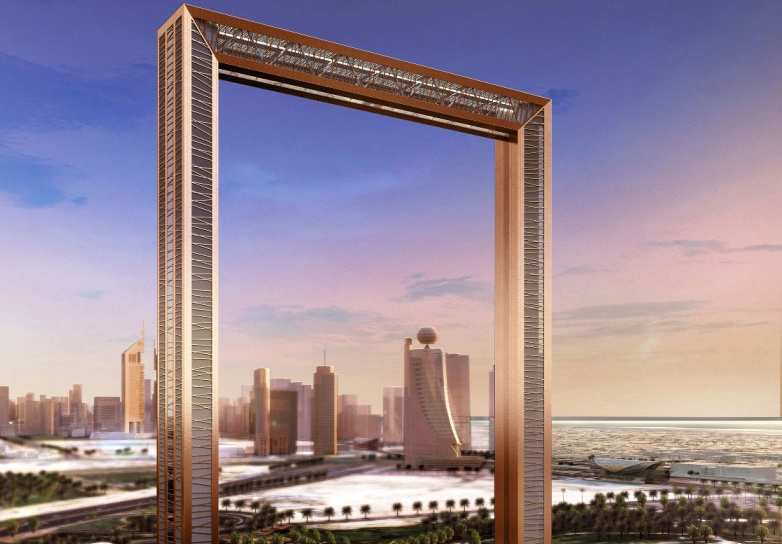 In January, visitors will enjoy a one-hour unique journey through time for only Dh50 for adults and Dh30 for children. Free tickets will be offered for children under 3, people over 60 and people of determination.

Two months from now, residents and visitors will be able to climb the stunning two-towered structure that stands tall in Dubai’s Zaabeel Park.

Dubai Frame, covered in stainless steel gold, isn’t only a landmark expected to attract two million visitors annually but is the city’s perfect way to tell its own story.

In January, visitors will enjoy a one-hour unique journey through time for only Dh50 for adults and Dh30 for children. Free tickets will be offered for children under 3, people over 60 and people of determination.

Measuring 150 metres high, the Dh160-million gold structure will connect the past with the present through a 93-metre bridge at the top that will give visitors a 360-degree view of Dubai. A one-minute elevator ride at the left tower will take them to the glass bridge through which they will see tall skyscrapers of Sheikh Zayed Road, the Burj Khalifa and the Emirates Towers that symbolise the modern part of Dubai on the South. Turning around to the north, the landmark areas of Deira, Umm Hurair, Bur Dubai and Karama will convey the old part of Dubai.

Hussain Nasser Lootah, Director-General of the Dubai Municipality, said since this landmark is made for residents, tickets were made at an affordable rate. “(We want) to make the experience accessible to everyone,” said Lootah.

Scheduled to open a month after Dubai Safari Park, the rectangular structure will be accessed through pre-booking system where visitors will be able to reserve their tour on an app.

Khalid Al Suwaidi, director of leisure facilities at the municipality, said the tour will take 20 people, and visitors will have to book their spot on the app. Paper ticket counters will be available on sight to guide tourists and those who might not have a smart system on hand.

“It is just like the Burj Khalifa experience where visitors must book their tour before going to site. Those who haven’t booked won’t be able to go in, unless there’s a spot available for them in the group. If there’s no spot, they will have to wait to join the next group,” Al Suwaidi had told Khaleej Times.

Contributing to the smart vision

Lootah had previously said the municipality looks to implement the government’s vision through its projects. By introducing e-ticketing system to both Dubai Frame and Dubai Safari, the municipality plans to go smart.

“Everything now is moving towards being smart, so in the future, we will not have paper tickets. Your smartphonewill be your ticket,” said Lootah

He noted that the municipality wanted to achieve uniqueness through the project by choosing the right material that is brand new to the construction industry. Lootah said this was the reason for the project’s two-year delay as it was initially slotted to officially open in 2015.

“Initially, we had first thought of having silver colour, but that was not giving the required aesthetic beauty of the structure,” said Lootah. The frame is now covered by a stainless steel gold cladding with an Expo2020-inspired design that Lootah said is used for the first time and is the reason behind the “frame’s brightness”.

The civic body coordinated with the Dubai Civil Defence in ensuring the safety of the structure.

The Dubai Municipality has recently signed an agreement with property giant Emaar to market and promote Dubai Frame, taking cue from its experience with the Burj Khalifa.

As per the agreement, the property giant will provide guidance on the operation of the premises and advise on the selection, recruitment, appointment and training of staff.

Al Suwaidi said the ticketing style is influenced by the Burj Khalifa’s ‘At the Top’. “We saw the successful and organised way that the Burj Khalifa implemented and that satisfied visitors to a large extent. We look to transfer this experience to the new landmark,” said Al Suwaidi.